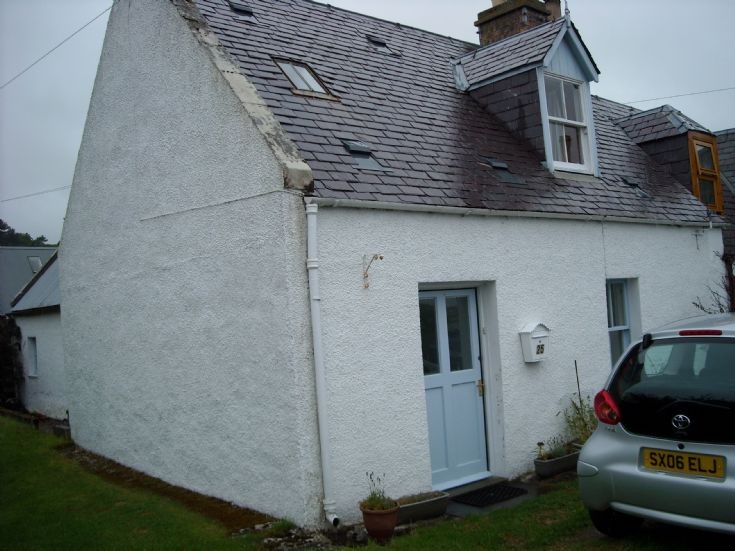 Pic Taken in August 2008, 25 Dock Avoch. The wettest time I can remember, This was the home of James and Isabella Patience my grandparents parents until they died 1961. Many fond memories of the village and still return occasionally.I might add my dad was George Patience (fiddler)who left the village for merchant then RNR during the ww2, he last returned home in 1947

James Patience
Picture added on 29 April 2011 at 15:32
Comments:
Jimmy.....I have seen photos your father and his brother on a Royal Navy website.....if you would like details you can contact me jack@avoch.com

Added by Alister Jack/Ali on 11 June 2011
i think we may be related, James. There are so many Isabella patience's and Alexander Patience's born in Avoch.I am trying to trace my family tree. My grandmother's maiden name was Catherine macleod Patience. Her parents were Alexander and Isabella Patience.
Added by Margaret Colley on 06 July 2011
Hi James,I loved the photo of your grandparents house in avoch. My grandfather was born at 50 Henrietta, Avoch in 1902, along with 13 brothers & Sisters. A monument for David Patience(my great, great grandfather is no 416, old churchyard, Avoch. Do you know if the cemetry is still there & accessible as I am visiting in may 2012. Thanks, Kathryn Patience, Australia
Added by Kathryn Patience on 02 October 2011
Kathyrn.....I will be here in Japan until 26 October 2011, when back in Holland I can then access more of my Avoch information and share with you some Patience family files if you wish, which may be relevant for you....the old Church yard is still there and freely accessible
Added by Alister Jack on 03 October 2011
Just for information. This Isabella Patience mentioned here, was known as Bella Ritchie [her maiden name]. She was not from Avoch but from, I think Whitehills.
Added by Mary Patience on 06 November 2011
This was where my dad was born too - Henry Patience. Yes our grandmother was from Whitehills. I have a few photos of the brothers when they were in uniform and other family members
Added by Annabel Gough on 16 April 2012
Annabel if you are interested you can also post photos on the new Avoch Past and Present page on Facebook.
Added by Ann Duggan on 18 April 2012
Sorry for not replying I have been more occupied of late, great to see the replies, Alistair I have seen those pics of John and James Patience on the naval site, it was me who posted them, I received them from Jean MacKay of Muiralehouse, my aunt.
Cousin Annabel would love to see the other pics of family members.
Grandmother was Isabella Smith Ritchie from Whitehills.

Best Regards
James
Added by James Patience on 11 December 2012
Apologies for the delay in replying, some health issues,Alistair thanks for the info,I think you may be confusing me with Jimmy (the Painter) Patience from Rosemarkie, I am his cousin from Middlesbrough. I am aware of the pics on the RN site, I posted them, I obtained them from Jean Mackay (Patience)my aunt,They are of James Patience and his brother John Patience, the site only caters for Naval Officers, whereas my Dad George was CPO and the others were Merchant marine captains postwar.
Henry Patience who Cousin Annabel refers to is the youngest brother, he also had a distinguished career as a Merchant Marine Captain. Andrew who survived the sinking of HMS Quentin 1942 was the miller in the village post war and went on to be Master of Trinity House vessel Patricia.
Isabella as mentioned came from Whitehills,(Fordyce)her name was Isabella Smith Ritchie.
There were 5 sons and three daughters
Margaret drop me a email if you think I can help, there are a number of Alexanders across three generations.
Really enjoy the site.

James
Added by James Patience on 12 December 2012
James I remember reading letters from my Grandad's cousin Annie Patience of 9 Shore street Avoch mentioning Bella Ritchie. It sounds as if Annie had many good friends like Bella.

Added by Ann Duggan on 12 December 2012
Thanks for your reply....are you James, the older brother of Barbara who was in my school class. You were probably about the same age as my brother John Main?
Added by Alister/Ali Jack on 12 December 2012
Alister,
No, I am Barbara and James's Cousin, Her father James and my father George were brothers.
Ann I only met Isabella (Bella) the one time when my father reurned home after the war, he took me and my brother George to see his parents in Avoch at 25 Dock,
My long time memories are of herrings,kippers and porrage for most meals, and strangely I still enjoy all three today.
Best Wishes
James

Added by James Patience on 13 December 2012
Hi James thank you for remembering me. Haven't been on here for a while. I must get started again soon. I found it so frustrating at times with the name Patience. Merry Christmas and speak in the New Year. Hope you are feeling better and all the best for 2013.
Added by Margaret on 13 December 2012
This was my father's house = Capt Andrew Patience MN, and it looked much better in the sunshine when we visited this June
We have 4 children : James , Isobel, Alexander and Phoebe
My cousin , Jim Patience ( son of George ) must be thanked for all his hard work on the family history

Added by (Andrew ) Gavin Patience on 05 September 2013
Gavin, Thanks for your kind words,
Jim Patience (cousin)
Added by James Patience on 07 October 2013
ANY pictures of avoch school from 1956or 1957
Added by Rose goodfellow on 19 April 2014
Rosemary Goodfellow was in the class below me, and I have a school photo of our two school classes.
Charlie Goodfellow worked together with my brother John Main Jack at Walter MacDonald's butcher's shop in George Street, Avoch
Added by Alister/Ali Jack on 24 April 2014