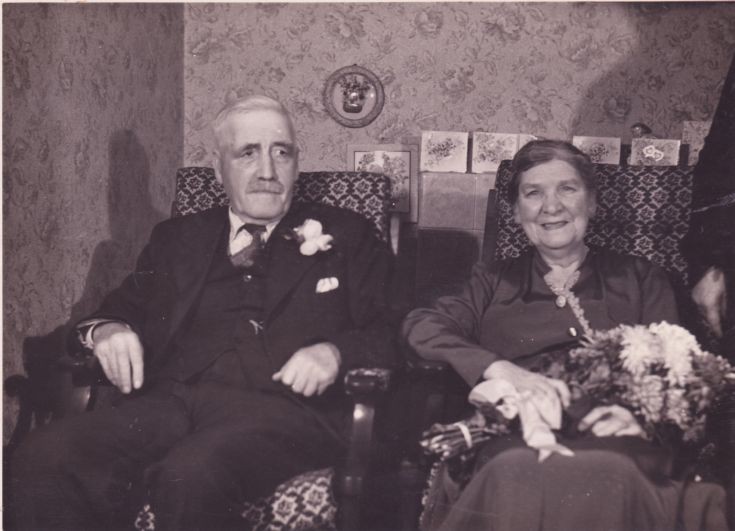 This is a photo of Donald Jack( Mericum) and his wife Betsy Sutherland celebrating their Golden Wedding anniversary in Oct 1954. They lived in Eastcott on the Braehead. Betsy’s mother Janet Patience was one of the survivors of the “1871 Droonins”, her father Donald Sutherland unfortunately lost his first wife Betsy Patience in the same drowning accident in which 14 from the village were drowned and 7 survived.
Donald and Betsy were my grandparents.
Picture added on 07 July 2010 at 18:51
Comments:
Hi, saw the golden wedding photo of Donald and Betsy Jack, we share the same great grandfather, Donald Sutherland. My great grandmother was Betsy Patience, who drowned in the 1871 disaster, their daughter, Janet, married David Skinner, my boaba, who lost a sister, Sarah, who I think was 23yrs.old and not the 20yrs. mentioned, also an aunt Elspet Jack nee Skinner and an aunt through marriage, Ann Skinner nee Jack. Would love to hear about any other information you may have on the family.

Added by Kathleen McGeorge (nee Skinner) on 06 March 2014
Donald Sutherland and Janet Patience were my great great grandparents, Betsy was my great grandfathers sister, his name was Alexander Sutherland, died 1908, his son my grandfather, was also named Alexander (Sandy)(ta) Sutherland.
Added by Ian Brown on 02 August 2014
Hi Ian,
nice to know someone else who is connected, my granny,
Janet Skinner nee Sutherland would have been half
sister to Alexander and my grand uncle.
Anonymous comment added on 12 August 2014
Sorry, forgot to put my name to above comment added on 12th August, it's Kathleen McGeorge, nee Skinner.
Added by Kathleen McGeorge (nee Skinner) on 13 August 2014
Hi Kathleen, no need to apologize, Alexander would have been Janet Skinners younger half brother, I think he died young of an appendicitis out at sea, I know my grandfather was christened on top of his coffin 1908, my grandfather would have been your dads cousin, I see a striking resemblance of photos of your aunt Betsy Skinner and my mum. To the best of my knowledge Betsy Patience and Janet Patience were cousins. Really nice to hear from you, my mums knowledge of the family is far more extensive than mine, I would be more than happy to pass it on if you ever needed any. Kind regards Ian.
Added by Ian Brown on 15 August 2014
Hi Ian,
thanks for replying, so sad that about Alexander, do you still
live in Avoch? What is your mum's name? we are visiting in
September.

Added by Kathleen McGeorge nee Skinner on 16 August 2014
These are my Grandparents ... my father was Robert Jack (Merican)) ... my father told me the byname came from the fact that my Grandfather was born on American Independence Day. I would dearly love a copy of this photograph and am trying to find out if this is possible?
Added by Patricia Mackenzie nee Jack on 03 January 2021